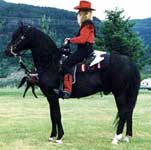 This aged stallion is one that breeders should not ignore as he brings down such valuable blood to today; blood that is rare and hard to come by. He brings two close crosses to the good Easter Vermont blood, being the product of a grandson being bred to a daughter of that horse. This is the classic inbreeding that works. Easter Vermont was by the great Red Vermont by Jubilee King. What part of this pedigree that is not Brunk is Western Working Family, most of that going back to Richard Sellman’s breeding, and one line back to old Montana breeding including the Baroque stallion Chief Buglar who had so much old Daniel Lambert behind him. This is proven breeding that produces correct, Baroque style, handsome, good minded, good moving Morgans made in the mode of the ancient ones.Montezsierradon is 26 years old and just retired. He will be spending his retirement years with Sandra Moats – the original owner who always regretted selling him in the first place.  In fact, Sandra is writing a book with the last chapter devoted to how ‘Donny’ came back to her.  OGO has been honored to care for him in the short time he has been with us.  We will miss you ‘Donny’.

Montezsierradon’s sire is Roland G. Hill, a 1971 brown stallion, bred by C. C. Dickinson of Loomis Calif., the son in law of Roland Hill the rancher. Owned by Laurence Personeni in the Sierra foothills and used as a ranch horse, this Morgan stallion sired excellent working ranch horses. The Personenis used their Morgans for ranch work and always had the only Morgans doing ranch work in the area. They found that the Morgans lived up to their heritage of “never reaching the end of the road,” as first said by this stallion’s namesake, Roland Hill, the rancher & breeder of so many good old California Morgans.

Roland G. Hill, the horse, was sired by Stormy E who was by Easter Vermont by Red Vermont by Jubilee King. Red Vermont’s dam was the solid Brunk mare Daisy Knox, who had very similar lines to Jubilee King, thus making Red Vermont typical of J C Brunk’s inbreeding. Red Vermont was an upstanding, handsome, baroque, correct Morgan of kind disposition and good temperament. Foaled in 1934, he left many excellent Morgans in California. His son Easter Vermont may have been the best. Foaled in 1947, he led an often harsh life, being neglected and ignored. He went blind in later years but was still a proud horse with a magnificent look to him. His dam Nona was of ancient California blood. Her sire was Chestnut Chief, 1931 stallion by Raven Chief. Raven Chief’s sire had a Bulrush sire line, going back to that son of Justin Morgan through the Morrill family. Raven Chief’s paternal granddam had two crosses to the Morrills, thus making Raven Chief an important carrier of that rare blood. Raven Chief’s dam was a Sellman mare as was the dam of Morgan Chief. The dam of Nona was Mixer and she too was by Raven Chief. Her dam brings in two more lines to the Morrills, through the same horses as elsewhere in this pedigree. Thus Nona was very inbred to that particular line of the Morrills. These were tough, hard-hitting horses who did well for the ranchers of Kansas and Texas.

Stormy E’s dam was Nancy’s Charm a daughter of Sonfield and out of the Querido daughter Nancy Jane out of a Sellman mare. Roland Hill got Querido from the Gov’t Farm and bred his Sellman mares and their daughters from his other stallions to this stallion. He then returned to the Gov’t Farm to get Sonfield, who was Querido’s nephew, and bred the daughters of Querido to Sonfield. He got some very good working horses. Much of the quality of Hill’s horses came from the Sellman mares on the bottom lines. These mares carried the blood of Headlight Morgan and Daniel Lambert from Sellman’s long term breeding program. They brought quality and Morgan type.

The dam of Roland G Hill was Justin’s Bright Star.  She was by Justin’s High Honor by Mr. Justin by Pomulus who was Government bred but had some different lines. The sire of Pomulus was Escort by McMahon Morgan General, by Scotland by General Gates and out of Highland Mary who had very close Daniel Lambert blood. Escort was out of Viola by General Gates and out of Marguerite who was the dam of Red Oak, the stallion who went to Richard Sellman to be bred to the daughters of Headlight Morgan. The dam of Pomulus was by Troubadour of Willowmoor, that excellent stallion of quality and type, and out of the Old Vermont mare Ruth. Pomulus ended up in Washington State and sired a few that bred on. Golden Princess was the dam of Mr. Justin and she was an L U Sheep Co mare by Plains King (Romanesque x Linsley daughter, Elmer Brown breeding) and out of a Flyhawk daughter.Justin’s High Honor was out of Honey Fly, a 1943 mare with some old Montana lines. Her sire was by Hal Mercury Jr, a registered Morgan with very little Morgan blood, being more Standardbred trotter. Her dam was out of a Hal Mercury mare but sired by the very good Chief Bugler with his intense Daniel Lambert lines. He was another of the old Baroque Morgans.

Justin’s Bright Star was out of Baby Lula O by Silver C A by Tehachapi Allen (Querido x Tab, Sellman mare by Texas Allen who was by Easter Allen Morgan & out of Bessie Morgan-the same Morrill blood as elsewhere in the pedigree) and out of the Linsley daughter Margett L (more of Elmer Brown’s breeding). Baby Lula O was out of Lula Lee by Querido and out of Red Oak Lu, a Sellman mare.

Thus, Roland G Hill had a very strong sire line of the old Brunk Morgans bred to the old Morrill Kansas horses. There is a strong Roland Hill element in the pedigree and then there is the Montana and Government breeding. But throughout is the critical element of Morgans being bred by ranchers for ranch work.

The dam of Montezsierradon is another Easter Vermont horse, Dusky Vermont. So Montezsierradon is inbred to Easter Vermont in the classic way-a grandson of that stallion being bred to a daughter of that stallion. This has been a time proven method. The dam of Dusky Vermont is another Roland Hill mare. Addy D Field was by Sonfield and out of   Addy C by Querido. Addy C is out of Addy, a Sellman mare sired by Texas Allen who brings more of that good Morrill blood from both sides of his pedigree. His sire is Easter Allen Morgan, by Headlight Morgan and out of Bessie Morgan by Flying Morrill. Bessie Morgan is also the dam of Easter Allen Morgan. So Bessie Morgan was bred to her own son to make Easter Allen Morgan. The dam of Addy is Pauline by The Admiral, that handsome, correct, Baroque stallion by Jubilee de Jarnette (Daniel Lambert descent) found behind nearly all of Sellman’s mares. Jubilee de Jarnette is also sire of Troubadour of Willowmoor seen elsewhere in the pedigree and also the sire of Quietude, dam of Sonfield.   The Admiral is out of Morrill Queen, which brings in more of that old blood.

Montezsierradon has one of the richest sources today of the old Morrill blood. It is concentrated in his pedigree many times and was purposely inbred by old ranchers who knew what they wanted in a working horse for tough conditions. That Bulrush blood was what they needed. The Bulrushes were tough horses-both of physical traits of toughness and endurance and mental traits. They were horses for horsemen and those who had to entrust their lives to the strength of their horses. The tough temperament of the Bulrush horses is tempered in this pedigree by the willingness of the Brunk horses coming through Red Vermont. The Brunk ancestry also brings in a true Baroque and stylish look which is complemented by other aspects of the pedigree also. Behind this horse are three master breeders of the Morgan breed-J. C. Brunk, Richard Sellman, Elmer Brown. All bred for true using horses with the Morgan look and mind. This gives Montezsierradon a very valuable pedigree for today’s breeders who wish to continue the Morgan heritage of using horses with style and good minds.