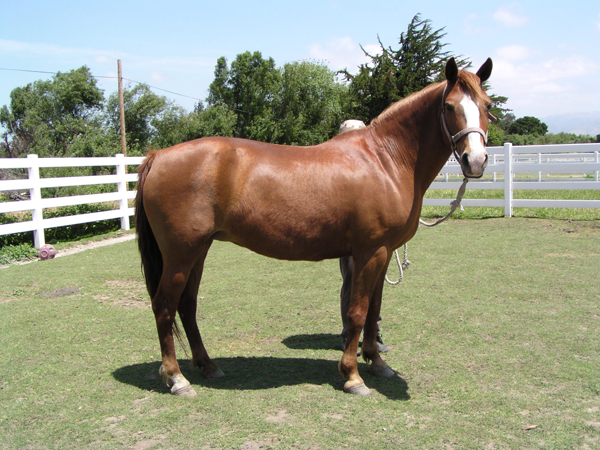 Foaled in 1970 and bred by Frances Bryant, Crawford helps to bring some old blood forward to this century. His sire was the wonderful Criterion, also bred by Mrs. Bryant. Crawford was a solid, correct, handsome, kind-tempered horse with excellent gaits who was not truly appreciated until late in his life. His get went on to become loved companions and breeding stock.

His sire Criterion, foaled 1961, had over 70 registered get. Criterion was well named as he did indeed set the standards for excellence. Watching him trot was like watching the spokes of a wheel go around—each stride being like the one before, never faltering or off. He had that true Jubilee King action of reach and roundness with the power coming from the rear. His kingly but kind nature was passed on to his get as was his willingness and intelligence. Crawford got all this and had the good Jubilee King traits also reinforced through his dam’s dam.

Criterion’s sire was also bred by Mrs. Bryant. Jubilee’s Courage was a son of the great Jubilee King. Courage sired many good horses who went to become important in other’s breeding programs. Bred by the master breeder, J. C. Brunk, Jubilee King was a Morgan of vast importance to the breed. He founded a family which lives on and is still sought after by breeders of today. Jubilee King was the result of decades of careful breeding by Brunk, who was breeding for a stylish, correct, good-minded using Morgan.

The dam of Jubilee’s Courage was the Old Vermont mare Townshend Lass, who had, along with her sire, the highest percent of Justin Morgan blood of any horse of her time. She was by the beautiful John A. Darling and out of Gladwin by Ethan Allen 3rd, a horse foaled in the late 1800’s. The dam of Criterion was Lippitt Robrita, a lovely mare by the grand Lippitt Rob Roy who was known as a good sire and good using horse. Lippitt Robrita was out of that Blue Hen mare Alrita who had two close crosses to old Ethan Allen 3rd. Alrita was the dam of many excellent producing mares and sires, as well as some excellent performance horses.

Crawford’s dam was Precious Ashmore, also bred by Mrs. Bryant. Precious, a lovely correct mare who was also an excellent producer, was by the gentleman Lippitt Ashmore who was known for excellent temperament, usability and as a good sire. Precious was out of another wonderful producing mare, Paragraph, who was herself out of another excellent producing broodmare, Nella, who in turn was out of yet another great mare, Liza Jane, and yes, she too was out of yet another of those great mares, Double Daisy. Paragraph was bred by J. C. Brunk and was yet another triumph of his decades of breeding. The sire of Paragraph was Jubilee King, whose pedigree so closely matched that of Nella’s, making an intricate dance of close breeding of which Brunk was such a master, setting the good traits so firmly for all who had the wisdom to follow the lead Brunk set.

Crawford brings to today that grand heritage started by Brunk—using Old Vermont line mares on the Daniel Lambert based stallions. Brunk also added in the excellent qualities of old Knox Morgan to the mix. Mrs. Bryant took the Brunk bred Jubilee King and Paragraph and then used the Old Vermont stallions and mares of her era. Crawford is the result of nearly a century of careful breeding by breeders who really knew what they were doing. Probably, it can be said that he is the result of such breeding all the way back to Justin Morgan himself, and is so on every line of his pedigree. There are no holes anywhere in his pedigree. His heritage is one of true Morgan strength and quality.

Foaled in 1972, this mare had only this one foal. Her sire was Chad’s Copper Lad and her dam was Foxy Mae Belle. Chad’s Copper Lad was foaled in 1963, and had 7 get before being gelded in 1973. Only two of those were mares and both were bred with their own produce also breeding on. Chad’s Copper Lad was by the Frances Bryant bred Chadwick who was by Jubilee’s Courage and out of the very beautiful Lippitt Dulcie, who along with her full sister Lippitt Duplicate is considered one of the most lovely Lippitt mares ever. Dulcie’s dam, Lippitt Dusky Kate was also very lovely and smoothly put together and produced the same in her foals. Chadwick, standing in Ohio, had 17 get. He was in the handsome, Baroque and correct mode of Mrs. Bryant’s horses.

The dam of Chad’s Copper Lad was Tonette, a 1953 mare bred by the L U Sheep Co of Wyoming. She went east from Wyoming, purchased by Helen Greenwalt and then stayed in Ohio with other owners, having 11 produce with 8 of those being by Chadwick. Her dam was Moneta, an L U Sheep Co mare by Highview King who was by King de Jarnette and out of Sentola (full sister to Jubilee King). King de Jarnette was by Jubilee King and out of Deura ( Senator Knox x dau. of Penrod). Penrod was also the sire of Jubilee King, showing once again the inbreeding utilized by Brunk. Moneta was out of the L U Sheep Co mare, Grovont by Linspar who was by Linsley and out of Sparbelle out of Donbelle, who was pure Old Vermont breeding. The dam of Grovont was by Flyhawk (Go Hawk x Lambert & Knox mare).

The sire of Tonette was Flying Jubilee by Flyhawk. Flying Jubilee was out of Juvina by Jubilee King. Juvina was out of Jeanne by Knox Reade (Knox Morgan x Mrs. Lewis—dau. of Charles Reade). Jeanne also had Charles Reade through her dam, a daughter of Sentiment. Charles Reade was a source pure and fast trotting ability. Flying Jubilee is best known as Ern Pedlar’s stallion, so often written about in stories by Ern for The Morgan Horse magazine. Ern chased and caught mustangs in the rugged and rough Utah desert and desert mountains, an extremely tough job that took an exceptional horse to do well. Flying Jubilee was a true using Morgan. Tonette’s pedigree is nearly all Brunk and certainly all proven using Morgans.

Foxy Mae Belle, dam of Bell’s Janee, was a 1961 mare sired by Foxfire by Bonfire by Senator Graham. Bonfire was out of the L U Sheep Co mare Luscious by Plains King by Romanesque and out of a Linsley daughter. This is more of Elmer Brown’s breeding to go with the Brown breeding seen already in the pedigree. Plains King was a popular stallion of his time, siring good using horses. His sire Romanesque was Sellman bred and a large, correct, solid stallion who sired many in his mold. Luscious was out of a Flyhawk daughter who was by a Linsley son.

Foxfire was out of that lovely mare, Jubilee Joy, who was by Flyhawk and out of Sentola. This is more of the same old Brunk breeding seen all through the pedigree of Belle of Amherst. Nearly every one of Sentola’s produce became important breeding Morgans, making her an important broodmare. This was also true of Jubilee Joy, continuing onwards this strong mare line. Foxfire had 113 registered get from the Midwest to New England. With his heritage of the strong blend of Brunk and Elmer Brown, he too was a strong breeding stallion.

The dam of Foxy Mae Belle, Patricia Gates, certainly had some good produce. Her dam, Quaker Maid, was yet another of those good L U Sheep Co mares, and was by Plains King and out of a daughter of Linspar. Patricia Gates was by Roubidoux, a stout, good sized, solid working Morgan sired by the Brunk Agazizz. Agazizz was by the prolific and handsome Juzan by Jubilee King and out of Liza Jane, that great producing mare who has so many important descendants today. Agazizz’s dam was Gizea also out of Liza Jane. Gizea’s sire was Go Hawk, who also sired Flyhawk. Once again we have that great Brunk inbreeding.

The dam of Roubidoux was another Elmer Brown horse, May Rockwood, sired by the Government Remount stallion Rockwood. May Rockwood’s dam was by an Old Midwest stallion and out of a Headlight Morgan daughter. Thus, we have more of Elmer Brown’s breeding to complement the rest of it in Belle’s pedigree.

So Belle of Amherst’s pedigree is a very strong one of great old breeders, the very foundation of the breed. Throughout the pedigree is the mastery of J C Brunk, repeated over and over. Her sire brings in some of the best of the Old Vermont blood and her dam brings in Elmer Brown. It is rare to see a pedigree which has so few elements—Brunk, Old Vermont & Elmer Brown, and nothing else. And remember that both Brunk and Brown had Old Vermont mares as foundations. This is a very special pedigree, so elegant and simple, with great breeding strength on every line.