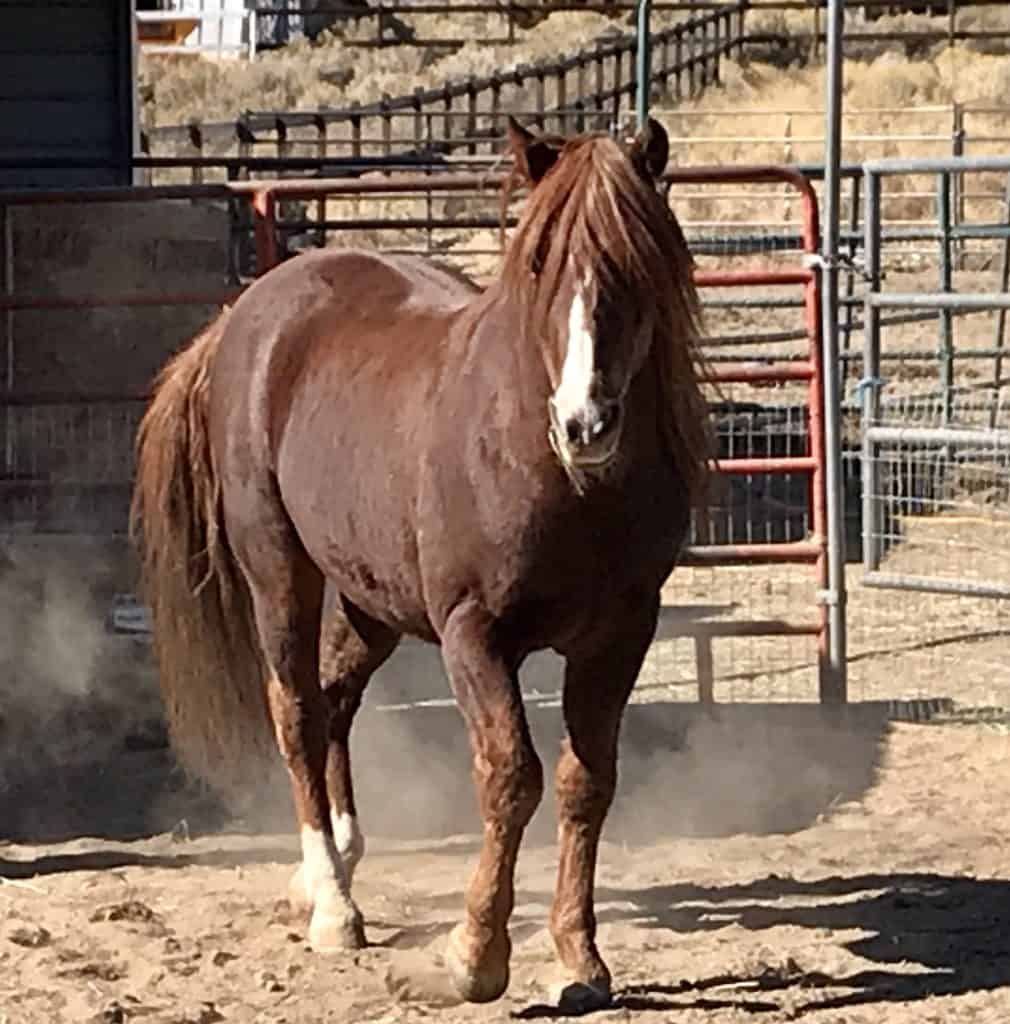 Foaled in 1974, this chestnut fellow went on to sire some good Morgans. Sid Spencer of Arroyo Grande, California chose Higuera Bandido to be her herd sire for some years. She had a working cattle ranch in the rugged Central California Coastal Range and needed sound, sensible working horses. Sid had been breeding Morgans for over two decades at this point and knew her Morgans. Later Bandido changed owners and bred for their business and outside mares. Bandido had many foals and was bred to mares of all different breeds. Most of his colts were gelded to become solid using horses. It was there that Wendy LeGate met Bandido. She was captured by him and based her OGO program on Bandido and his foals as much as she could. Then, in 2019, Wendy purchased an unregistered entire son of Bandido’s that she was able to register and make her own. His name is OGO Far West Justin AEG. AEG stands for Arlene Elaine Guzzie, which is after Wendy’s dear friend who passed away in August 2019.

Bandido has a pedigree of Brunk and Western Working Family. His sire, Celebration, was a 1952 colt, bred by Helen Greenwalt in Illinois. He was sold as a youngster to Ohio where he did well in the show ring and as a sire. Later, he came west to California and sired more good ones. His dam was the noted producing mare, Jubilee Joy who was by Flyhawk and out of Jubilee King’s full sister, Sentola. Celebration’s sire, Bonfire, was also bred by Helen Greenwalt, and while he did not have many foals, they were good ones with most breeding onwards. Bonfire’s sire was the very good Senator Graham who sired not only for the working ranch, L U Sheep Co. of Wyoming, but for show ring breeders in the midwest and people who wanted a good using horse. Senator Graham was bred by the master breeder, Elmer Brown of Kansas.

The dam of Bonfire was Luscious, a 1940 mare bred by the L. U. Sheep Co., Wy. She was sired by the Elmer Brown bred Plains King, himself a very good sire who was by another very good sire, Romanesque, bred by Richard Sellman, TX., one of the cornerstones of the Western Working Family (Elmer Brown was another cornerstone of this family.). The dam of Romanesque was sired by Headlight Morgan, of pure Old Vermont blood and another great sire. The second dam of Romanesque was a daughter of The Admiral, another grand stallion used by Richard Sellman. The Admiral was Lambert and Morrill blood. Romanesque’s sire was Red Oak, a stallion who sired many good ones for Sellman. The dam of Plains King was Ella Linsley, another one bred by Elmer Brown, and sired by another great sire, Linsley, who was out of the Headlight Morgan daughter, Sunflower Maid who brought in more lines to Morrill. Ella Linsley’s dam was mostly the Old Midwest Family but with a bottom line going back to Headlight Morgan.

Luscious was out of the Flyhawk daughter, Black Dinah, also bred by LU Sheep CO. Flyhawk was by an Old Midwest stallion, Go Hawk, and out of a Brunk bred Lambert mare, Florette. Dinah, the dam of Black Dinah, was sired by Linspar who was by Linsley and out of Sparbelle who had an Old Midwest sire and an Old Vermont dam. This was another strong breeding family. Dinah’s dam was one of the very first of the LU Sheep Co’s program with an unrecorded dam and by a son of the famous Dan Patch.

Celebration’s pedigree has proven breeding strength on all lines and is well balanced with careful breeding by masters of good using Morgan programs.

Countess of Copper, the dam of Higuera Bandido, was bred by Steve Reeves. She brings in more of some of the good blood found behind Celebration. Her sire, Kings Ransome was also bred by Reeves and was sired by the LU Sheep Co. stallion, Dickie’s Pride who was by Flying Jubilee (Flyhawk x Juvina, by Jubilee King) and out of Dawn Mist, a palomino LU Sheep Co mare by Fillmore and out of Quita. Quita, another palomino, was out of the buckskin Luxury sired by Night Tide who was Brunk bred, being by the Government Farm stallion acquired by J C Brunk, Tiffany. Night Tide’s dam was by Allen King and out of a Charles Reade daughter, all solid Lambert blood. Luxury was out of the LU Sheep Co mare, Mallow, who shows the pattern of the early LU breeding. She was by Linspar (Linsley x Sparbelle) and out of a Flyhawk mare who was out of a daughter of the Son of Dan Patch. Linspar was another bred by Elmer Brown and his maternal grandam was the great producing mare, Donbelle.

The dam of King’s Ransom was Gay Jipsey, bred by another excellent breeder of working Morgans, E. W. Roberts of San Diego Co. California. Her sire was the Government Gay Mac. She was out of an Elmer Brown mare who was by Tehachapi Allan, bred by Roland Hill (another of the Western Working Family cornerstones) who was sired by Hill’s Government Stallion, Querido. Tehachapi Allan was out of the Sellman bred mare, Tab, a great granddaughter of Headlight Morgan. Tab’s sire, Texas Allen, was out of Bessie Morgan of Morrill and Old Vermont lines, and his sire was also out of Bessie Morgan, making him inbred to the greats behind her. Tab’s dam was by another of the Sellman stallions, Major Antoine.

The dam of Countess of Copper was Princess Sonfield, bred by Roland Hill, and by Sonfield. Her dam was the Morab mare, Princess Sabab, bred by the Hearst Ranch who brought some of the better old Arab blood into their program. The dam of Princess Sonfield was a full sister to Tehachapi Allan.

Higuera Bandido had a solid pedigree behind him with many strong breeding Morgans, both sires and dams. He was able to take this genetic power house and continue the legacy.

This 1980 mare had a mostly old California pedigree. Her sire, Golden Pronto, was sired by the good stallion, Ro Mac, who sired many good ones for California breeders. His sire,Gay Mac, was from the US Government Farm and sired many good working Morgans in California. The dam of Ro Mac, Bessie Ro, was bred by Roland Hill and was by Querido and out of a Sellman mare by Red Oak. The dam of Golden Pronto was Marygold, sired by Sid Spencer’s good working stallion, Antman, who sired many good ranch horses for Spencer and others. Antman’s sire was the noted Mountcrest Sellman, bred by Sellman in Texas and used by Reginald Parsons and the Hearst Ranch in California to sire more good ranch Morgans. He has left a lasting legacy of solid, correct working horses. He was a grandson of both Headlight Morgan and The Admiral. Antman’s dam, Pontez, was out of a Hill mare sired by the Brunk bred stallion, Pongee Morgan. Her dam was another Sellman mare by Red Oak. The sire of Pontez was the very good working Arabian, Antez who sired many excellent Arabians as well as the Morabs of Hearst Ranch. Antez was a handsome, correct, good-tempered horse, much admired by breeders of the day.

The dam of Far West Justina was Oak Hills Cortina. Cortina’s dam was Impala Claudia. The Impala prefix was well known in California as they bred many excellent Morgans for show ring and all other uses. Claudia’s dam, Miss Tayler, was sired by Blackman who was by Redman, and Miss Taylor was out of a Redman mare, who was out of Antellah, a daughter of the Arabian Ansarlah, a grandson of Antez. The dam of Antellah was by Pongee Morgan, out of a Sellman mare. The great stallion, Redman, was a son of Mountcrest Sellman and out of a Pongee Morgan daughter who was out of a Red Oak daughter who was also a granddaughter of The Admiral. The Redman son, Blackman, a great stallion in his own right, was out of the Brunk bred mare, Gojea. Claudia’s sire was the well known California King, a popular sire with many descendants. His sire, Duke, was by a Clark Ringling of Nevada stallion, Winnemucca, who was sired by the Government bred Revere and out of a Revere daughter, Brown Leaf R who was out of a mare sired by the Government stallion Dewey and out of a Dewey daughter. Ringling was not afraid of some inbreeding. Brown Leaf R, on her bottom mare line, goes back to a mare named Bessie who was of Old Spanish California stock. Winnemucca was the result of many generations of Clark Ringling’s breeding for good working ranch horses in a remote area of Nevada.

The dam of Duke was Roseta Cortez, another Roland Hill mare who was by Headlight Morgan and out of a daughter of The Admiral. Roseta Cortez’s dam was the Elmer Brown bred El Cortez, sired by that great stallion Romanesque, who was by Red Oak and out of a Headlight Morgan daughter, and out of a Linsley mare who was out of Donbelle. This was solid old Kansas and Texas ranch breeding. The dam of California King was Clovernette, by the Mountcrest Sellman son Cloverman who was out of a Hill bred mare by Querido with a Sellman dam. The dam of Clovernette was Fawnette by another full sibling to Tehachapi Allen, Red Wings. Fawnette’s dam was Fawn K, out of Red Tawn by Querido and out of another Sellman mare. Fawn K was sired by the Arabian Kasar who traced back to many of the same ancestors as did Antman.

The pedigree of OGO Far West Justin AEG is one of balance with the same good breeders and good horses appearing multiple times. Justin has behind him the three cornerstone breeders of the Western Working Family—Roland Hill, Richard Sellman, Elmer Brown—all of whom were breeding for solid, sound, good working ability Morgans for ranch work. In addition, Justin has some valuable lines back to good ranch Arabians of pure old blood, which constitutes a little more then 1/16th of his pedigree. It must be remembered that Arabian blood was behind the early Morgans and that the Arabians coming into the breed through the Hearst Ranch were in many ways similar to Morgans in looks and temperament. It was a natural blend, carefully done.

This stallion has valuable old lines, up close, to bring forward to today’s breeders.