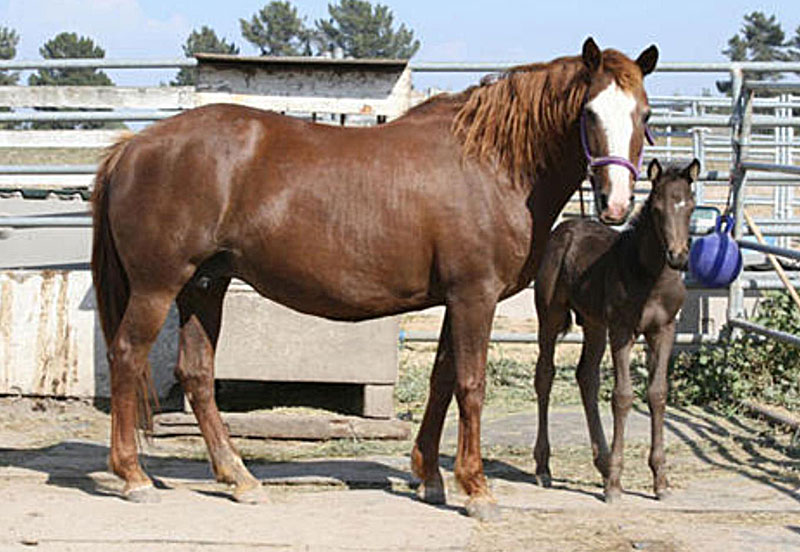 I will be breeding Ursula to Badger to double up on WoodRose Katrina‘s bloodlines with the contributing strength of the sirelines of Higuera Bandido and Primavera Valdez.  I believe the cross will be stunning!  Also down the path for Ursula, I will be breeding her to Vining Lamar and OGO Higuera Rio Bravo.  A breeding to Rio will double up on the amazing bloodlines of Higuera Bandido with the combined strengths of the dams, Circle H Merlita and WoodRose Katrina.

Woodrose Katrina , a bay 1982 mare, was sired by Windswept Imperial out of Tacinca by Rusty out of Winona. Woodrose Katrina was a mare of solid Old California breeding combined with Old Working Western breeding. Her sire Windswept Imperial , a black 1965 stallion was shown Western Pleasure and In-Hand by John Gorman of Garnersville, NV.. Windswept Imperial was sired by California bred, and well known Dapper Dan out of the Antman daughter Little Sweetheart. Dapper Dan , sire of 108 Morgan foals, was a bay stallion , 14.1 hands, and many time show winner. He was sired by Trilson and out of Bess Gates. Bess Gates was by Gay Mac out of Bessie Ro by Querido. Trilson was sired by Katrilan Prince who was bred by the Hearst Sunical Land and Packing Co. of California. Katrilan Prince’s dam was Princess Allan by Querido X Tab. Trilson’s dam was Roseta May by Sonfield out of Roseta Mala. Already we see a pattern emerging- that of the blending of Old California blood with that of Querido of US Government Farm breeding. Katrilan Prince was by Katrilan out of Princess Allan by Querido. Katrilan was by Uhlan by Bennington . Katrilan was bred by WR Hearst of California. His dam was Katrina C by Querido out of the Sellman bred Red Oak daughter-Rokit. Uhlan’s dam was Poinsetta. Poinsetta was by Troubadour of Willowmoor out of Babe by Bob Morgan. Uhlan was US Government Farm bred. Babe by Bob Morgan, on his side of the pedigree goes back to both Sherman and Woodbury. On Babe’s dam’s side – Babe’s dam was the Coe Mare- she goes back to Sherman through Daniel Lambert and via Cobden ( sire of the Coe Mare) she has Red Robin by Justin Morgan as well. Babe also has two lines to Ethan Allen by BlackHawk. This makes Poinsetta , dam of Uhlan especially rich in Sherman blood through Ethan Allen on both sides, as well as Daniel Lambert, and his line to Jubilee De Jarnette – on Troubadour of Willowmoor’s pedigree. Uhlan being by Bennington by General Gates was a tail male Sherman bred horse. Going from the past to the more present, the dam of Katrilan Prince- Princess Allan was by Querido and her dam was the Sellman bred mare Tab . Tab was by Texas Allen out of Birdie by Major Antoine. Texas Allen was by Easter Allen Morgan, a son of Headlight Morgan. Easter Allen’s dam was Bessie Morgan by Flying Morrill. The Morrills went back to Bulrush Morgan. Bessie Morgan’s dam was Sunrise who went back to both Woodbury and to Sherman. Tab’s dam Birdie by Major Antoine was out of Dolly Bonner by Old Jordan who was said to be Morgan. Major Antoine was by Meteor Jr by Meteor. Major Antoine’s dam was Molly Lee by General Lee. On both sides of Major Antoine’s pedigree he goes back over and over to Sherman Morgan through BlackHawk. He did have a couple of lines to Woodbury via Gifford, and one to Brutus by Justin Morgan through his dam Molly Lee. Roseta May was the dam of Trilson. Roseta May was by Sonfield out of Roseta Mala. Roseta May was bred by Roland G. Hill, her dam Roseta Mala was also bred by Hill. Sonfield was sired by Mansfield out of Quietude by Troubadour of Willowmoor. Sonfield was bred by the US Government Farm, and purchased by Roland G. Hill after a purchase by another party fell through. Sonfield was the sire of an astonishing two hundred thirty six registered Morgan foals. Quietude’s dam was Ruth a mare of primarily Sherman blood carrying Billy Root, Billy Bodette, Billy Folsum and Billy Roberts as well as Royal Morgan, The Streeter Horse and Ethan Allen II. She did have lines to Woodbury as well, through Gifford via Hale’s Green Mountain Morgan to Gifford by Woodbury. Roseta May was the dam of thirteen Morgan foals. Her dam, Roseta Mala produced five Morgan foals. Roseta Mala was by Joaquin Morgan. Joaquin Morgan was bred by Elmer Brown of Halstead, Kansas, and sold to Roland G. Hill . He sired thirty three Morgan foals. Joaquin Morgan was by the Sellman bred Romanesque out of Margett L. Romanesque was by Red Oak out of Mariah K. Mariah K was by Headlight Morgan out of Sweet Marie by The Admiral. The Admiral was by Jubilee De Jarnette out of Morrill Queen who carried the Bulrush blood Sellman so often used. The Admiral and his daughters represents ‘core’ Sellman breeding- combining all three major Justin Morgan sons. Margett L was bred by Elmer Brown. Margett L was sired by Linsley out of Donbelle. Linsley was by General Gates out of Sunflower Maid by Headlight Morgan out of Fanny P.
Headlight Morgan went back to Woodbury primarily, with Black Hawk present on a line, and Fanny P by Julian Morgan by Winnebago Chief out of a daughter of Flying Morrill- went back primarily to Bulrush Morgan with fewer lines to Woodbury Morgan and a line to Sherman. Donbelle on the other hand, was of what we call Ancient Vermont breeding and she was about a half and half mix of Woodbury and Sherman Morgan. Donbelle was by Donald out of Belle C Graves. Donald was by Ethan Allen II out of Fanny by Ethan Allen III. Belle C. Graves was by Billy Roberts – who went back to Billy Root by Sherman- out of the Hudson Mare who went back to Sherman top and bottom.

Ursulas Higuera Bandita has a heritage and inheritance that is very scarce and rather unique- it is extremely rich in the bloodlines of Richard Sellman, and the next generation of his breeding program that became Old California breeding. And after that became Working Western Breeding. It is heritage of doing, using horses who proved themselves over and over on the ranch, on the trail, and in the show ring, though that last was the least of their proving perhaps. This young mare should be a terrific producer of foals with substance, sanity, and intelligence. She and her produce should have staying power and great hearts to go with the inheritance of her pedigree.