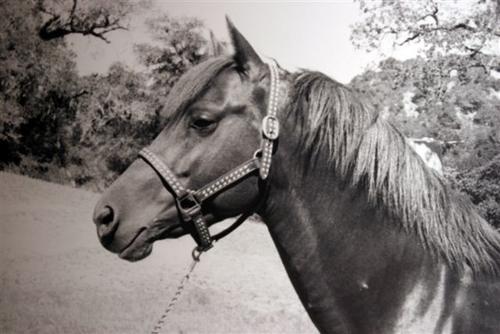 Coming from a proven working heritage, Bandido was chosen by rancher Sid Spencer to head her breeding program and Lucia prefix in the 1970’s. Bandido’s sire was mostly Brunk bred with some Western Working Family coming from the L. U. Sheep Co. of Wyoming. Bandido’s dam repeated this theme and added to the bottom mare line the old California branch of the WWF.
Bandido’s sire line goes back quickly to Senator Graham, the well known sire of many good working and using horses. His heritage was that of J. C. Brunk—all superior working horses. Also behind Bandido can be found Jubilee King and his sister Sentola and other good Brunk bred Lamberts. Another branch of the Brunk family, that coming from the Old Midwest lines of Go Hawk, is to be found as Flyhawk is also multiple times in Bandido’s pedigree.

Beautifully and carefully mixed with the Brunk are Morgans from those cornerstone founders of the Working Western Family, Elmer Brown and Richard Sellman. Sellman breeding is also found at the bottom mare line coming in through the Roland Hill mares from Sellman’s Texas ranch. Coming in both through the Brunk and the Working Western Family lines are a few choice Government stallions again bringing a working and using background.

Bandido’s heritage is truly that of Morgans chosen for working, stamina, dependability both on western ranches and the farms of the Midwest. He brings forward into this century some excellent and valuable blood from old Morgans and old breeding programs and he brings it in a form very useable for today’s breeders rather they be preservationist breeders, breeding for working horses, sports horses or all around excellent friends and partners. 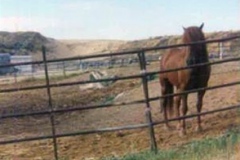 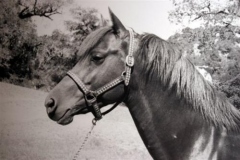 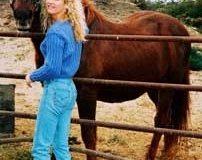 Born in San Jose California, Higuera Bandido was chosen as a weanling by Mary (Sid) Spencer to head up her long time ranch horse breeding program. Sid came from a ranching family, running cattle in the rugged Central California coastal hills of San Luis Obispo County. This was Vaquero country with a long history of people who appreciated good working horses and who knew how to train these horses. Just on the eastern side of the mountains and hills was the famed Roland Hill who raised Morgan horses for his ranches of the Central Valley and Nevada. Many of his horses found their way to the coastal side of the mountains where the ranchers there appreciated the traits of the Morgan. Not far from Sid’s ranch, the Hearst ranch was breeding both Morgans and Morabs for ranch use also. Sid grew up knowing the value of these ranch Morgans and adopted them for her own. Her first stallion, Antman, came from the Hearst program and he headed her breeding program in the 1950’s and was used on the ranch also. Higuera Bandido was chosen to continue this tradition.

Bandido himself came from a heritage of using and working Morgans. His sire was mostly of Brunk breeding and his dam was Western Working Family (with a strong debt to the Brunk horses), coming from close up working, ranch bred horses. The Brunk family of Morgans started early in the previous century with J. C. Brunk of Illinois who bred stylish Morgans for farm work. They were fancy enough and he showed them with good success. He sold his Morgans to other farmers, to ranchers in the west and to anyone who wanted a true using Morgan of the sort for which the original Figure was so much celebrated. Later generations of the Brunk family sometimes drifted some from J. C.’s goal, breeding more for the show ring. But the original work of J. C. still ran true in the later Morgans.

Bandido’s sire, Celebration, was foaled in 1952, bred by Helen Brunk Greenwalt of Illinois. He was shown much, with much success. By this time, there was little demand for working horses and the show ring was often the goal of breeders. At this point, however, Celebration, although bred with an eye to the show ring, still was bred for the original Brunk traits of usability and sensibility. His second owners were Californians and it was in this state that he had most of his progeny. Sadly, while his get did well in the show ring and were much loved by backyard owners, very few were bred on as his get came of age at the same time as the beginning of the fad for the very refined look in the show ring. So it is his son Higuera Bandido who is a primary source of the blood of Celebration.

Celebration was sired by Bonfire who was bred by the L. U. Sheep Co. of Worland Wyoming. The L. U. Sheep Co. was closely associated with the Brunk family and bred many good working Morgans based on Brunk stallions. For whatever reason, Bonfire had only 12 get, but many went on to have many important progeny of their own. The legacy Bonfire left was far beyond the few foals that he had. Bonfire’s sire was the great Senator Graham, bred in Kansas at request of the Brunk family. He was pure old Brunk except for the sire line of his dam which was Government breeding, a stallion that J. C. Brunk had acquired from the U. S. Government Farm. Bonfire’s dam was Luscious, another bred by the L. U. Sheep Co. Her sire was the great Plains King, a son of the grand Romanesque. Romanesque was bred by Richard Sellman, one of the cornerstone founders of the Western Working Family, and Romanesque was used by Elmer Brown, one of the other cornerstone founders of this family. Plains King was bred by Elmer Brown and out of a Linsley daughter. These are Morgans who cause today’s breeders great joy that they were bred and had the chance to breed onwards. The dam of Luscious was Black Dinah who takes us back to the Brunk family with her sire Flyhawk.

Celebration’s dam was the great Jubilee Joy, who was dam of so many important breeding horses. Jubilee Joy was truly a founder of her own family. Jubilee Joy brought together the two strains of J. C. Brunk’s original breeding, being sired by Flyhawk and out of the mare Sentola, who was full sister to one of the breed’s greatest sires, Jubilee King. Flyhawk while having a Lambert and Knox Morgan line dam, had as sire Go Hawk who brought the Old Midwest family to today.

And what of Bandido’s dam, Countess of Copper? She too comes from a outstanding heritage. Although not bred herself for working ranch conditions, she was bred by a man looking for the true old Morgan traits and solid usability. Her sire, King’s Ransome, takes us back to the L. U. Sheep Co. on his sire line. Like Countess of Copper, he was bred by Steve Reeves, and sired by the well known, versatile Dickie’s Pride who came from the L. U. Sheep Co. program. His sire was Ern Pedlar’s beloved Flying Jubilee, who with Ern chased Mustangs in the rough Utah desert mountains, as well as every other possible job a ranch horse can have. Flying Jubilee was sired by Flyhawk and out of a daughter of Jubilee King; Brunk breeding through and through. Juvina, the dam of Flying Jubilee, was out of a mare going back to Knox Morgan and Charles Reade, bringing more of the strength of Brunk’s original horses.

The dam of Dickie’s Pride, Dawn Mist, was by the Government bred Fillmore, and out of Quita who was by Highview King. Highview King was by the Jubilee King son, King De Jarnette, and out of Sentola. Thus we are back to the same horses that are found behind Bandido’s sire. Quita’s dam Luxury, was by Night Tide, sired by the Government Tiffany, and out of Mallow, by Linspar a son of Linsley, bringing us back to Elmer Brown again. So the sire of Countess of Copper has very much the same breeding as Celebration, following in the tradition of how J. C. Brunk bred his horses.

The dam of Countess of Copper is all old California ranch breeding. Princess Sonfield was her name and she was bred by Roland Hill, he who did so much to bring Morgans to California and spread them through out the state. As one might guess, Princess Sonfield was sired by Sonfield, the Government bred stallion purchased by Hill to head his program in the 1940’s. But the dam of Princess Sonfield was a departure for Hill as she was not by the stallion Querido, but rather a product of the Hearst Ranch program. This is Princess Sabab, foaled 1934, and sired by the Arabian Sabab, who traced back two times to the grand Arab Deyr. The dam of Princess Sabab was Princess Allan, foaled in 1929 and bred by Roland Hill, sired by the Government stallion Querido, and out of Tab, that excellent Richard Sellman bred mare who was dam of several important California Morgans of the early era.

And so Higuera Bandido comes from a strong working heritage and a strong breeding heritage. This brief overview cannot do justice to all the great Morgans behind him and the strong family from whence he comes. Generation after generation, these Morgans were bred for the traits of usability, good sense, wonderful temperaments, strength, and they were proven in this work in the ranches of the west and the farms of the Midwest, all the way back to their ancestors who proved themselves in Vermont.