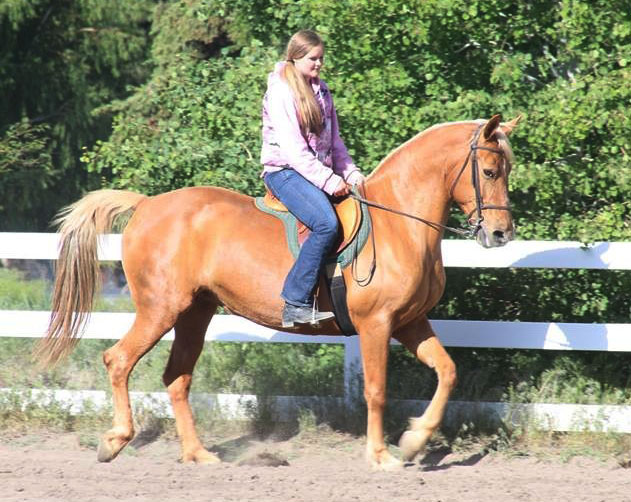 I am currently leasing this mare from Sharlene Shields of Acorn Morgans, and she is checked in foal to OGO Primavera Red Oak for a 2015 foal.

The dam of this mare is T Tyme Sunday’s Delight (see Sunday’s Pedigree) who brings intense old Brunk breeding and Western Working Family primarily based on Elmer Brown and Richard Sellman. Much of this good breeding is also found in the sire of Two-C Sissy Herod, Mac’s Littlebritches (Mac’s Baby x Golden Judy). Below is a discussion of Mac’s Littlebritches’ pedigree.

This stallion’s pedigree has Sellman, Elmer Brown, Brunk, and Old Midwest as the predominant elements, closely followed with a strong dose of Old Vermont and Government. His sire, Rich Gold, was by Gold King by Yellow Cat, by Morgan Gold by Red Correll, the well known sire whose sire was Old Midwest. Red Correll’s dam was Elmer Brown bred, being by Romanesque and out of a Linsley daughter. This cross of Romanesque to a Linsley daughter was a tried and true way to produce good working Morgans. Breeding Kate Smith to the old Midwest Will Rogers was going back to the Old Midwest behind Kate Smith’s bottom dam line.

The dam of Morgan Gold was Luellen a smoky black from the L U Sheep Co. of Wyoming. She was by Night Tide, Brunk bred, and out of a Flyhawk daughter whose dam line went to Linspar by Linsley. Linspar’s dam, Sparbelle, was by the Old Midwest Sparhawk and out of the Old Vermont mare Donbelle who did so very much for Elmer Brown.

The dam of Gold King, Penny Lucette Dancer, was by White Cap Allen, by Agazizz by Juzan (Jubilee King x Liza Jane). Agazizz was out of Gizea by Go Hawk and out of Liza Jane. White Cap Allen’s dam was Donbelle Allan by Tehachapi Allan and out of Donbelle. The dam of Penny Lucette Dance, Roxie Robin, has an interesting pedigree. Her dam, Roxie Kellogg C K, is the result of breeding Captain Kellogg to his daughter Gwenalan. Then, Gwenalan is also the dam of Roxie Robin’s sire, who is by Harris Linsley (Linsley x Sparbelle—Sparhawk x Donbelle). Headlight Morgan appears seven times in Roxie Robin’s pedigree. Captain Kellogg was a rich flaxen chestnut with Baroque profile and good depth and substance.

The dam of Mac’s Baby was Eager’s Spring Fling (Two Star Eager x Pixie Eager), a double granddaughter of Topside Eager Beaver. There is more close breeding since the dam of Spring Fling’s sire is Miss Rockwood and the dam of Spring Fling’s dam is a Miss Rockwood daughter (who was by Red Correll). Miss Rockwood is out of Lady Rockwood who is a Red Correll granddaughter. Miss Rockwood is by Swanne, son of Swanton (x Bennington), and out of Little Lulu by Morgan Gold (found behind Mac’s Littlebritches’ sire side). Topside Eager Beaver is by Broadwall Brigadier, by that grand stallion Parade who was by Cornwallis of Old Vermont lines and out of Mansphyllis who was out of Paragraph, that outstanding broodmare by Jubilee King and out of Nella.

The dam of Broadwall Brigadier was Bonanya, one of the Theis Bros. mares from Kansas who made the train trip back to Rhode Island and Broadwall Farm. She was based on the proven breeding of Elmer Brown and Sellman. Her sire was Raymond S Sentney, by Chocolate (Linsley x Lady Spar) and the dam of Raymond S Sentney was Skiner, mostly Sellman breeding. The dam of Bonanya was Silver Mae by Roscoe Sentney, by John Allen by Tehachapi Allan. John Allen’s dam was by Linsley   and out of Jannace (Sparhawk), as was the dam of Roscoe Sentney. The dam of Silver Mae was by Silver Ranger (Querido x Angelina—Sellman) and out of Betty Dean who was Dixie x Dan’s Bess, the same cross as the dam of Raymond S Sentney. There is enough inbreeding in this pedigree to make one’s eyes cross! The Sentney program produced some very good using Morgans, raised on the Kansas range. Chocolate was a balanced, deep and stout Morgan who did ranch work and cutting.

The dam of Eager Beaver was an L U Sheep Co. mare with Government and Brunk behind her.

While Mac’s Baby does not have well known horses close up in his pedigree, his pedigree is one of much close breeding, consistently through each generation, and done by those looking for good using horses. Many of the horses behind him were the unsung working ranch horses and the broodmares who were range mares, living on their own and enduring sometimes tough conditions. These horses never gained show ring fame nor did their owners care for show ring fame. Their worth was measured in a day’s work, and for the mares, in the quality of foals they produced.

The dam of Mac’s Littlebritches brings in more of the WWF along with another large does of Brunk. Her sire was by Gold King, found also behind Mac’s Baby’s sire. The paternal granddam of Golden Judy was Becky Flash, whose dam has the same blood found behind Mac’s Baby and whose sire is Brunk & WWF. The dam of Becky Flash was Queen Maid by Sorrley by Shenandoah (x Bennington) and out of a Brunk mare. Queen Maid was out of Maid Violet, also by Shenandoah, and out of Babe King who has the same breeding behind her as that of Bonanya, being by a Romanesque son whose dam was a Linsley daughter and whose second dam was by Dude Hudson and out of Hazel S. Babe King was out of a mare by Silver Ranger (Querido x Selman mare) and the second dam was the Dixie Dan and Dan breeding of Texas, seen elsewhere in the pedigree.

The sire of Becky Flash was Jubilee’s Flash. He was by Gen. Cotton, a double grandson of Ethan’s Jubilee by Cotton Hill’s Choice (discussed in the mare T Tyme Sunday’s Delight). Ethan’s Jubilee was out of Rugee by Go Hawk and out of Red Ruby. This is rich old Brunk breeding. The paternal granddam of Gen. Cotton was Irma Bird by Monte Leon by Silver Ranger and out of a Dan daughter. Irma Bird’s dam was Bar S Mary by Tehachapi Allan and out of Mary R M (Romanesque x Dude Hudson x Donbelle daughter). The maternal granddam of Gen. Cotton was Missouri Honey by Morgan Gold (appearing again) and out of Pine Ridge Edna by Azazizz (Juzan x Gizea) and out of Kitty Edna, a Winterset ( more of the Old Midwest) daughter.

The dam of Jubilee’s Flash was Jubilee’s Pastime, whose sire was Independence Jubilee, who also was the sire of General Cotton. The dam of Pastime was Missouri Lady by Brownie A by Tehachapi Allan and out of Molly R M by Romanesque. Missouri Lady’s dam was Bar S Spar, also seen elsewhere in the pedigree, she by Roman Light and out of Bar S Lady. So here yet again, is a pedigree with a high degree of close breeding to several ancestors.

Wanona Princess was the dam of Golden Judy and her pedigree was nearly all Brunk. Her sire was Prince de Jarnette by Larruby King Royale by Fudge Royale. Fudge Royale was by the Tarron son Tarman. Tarman was out of De Ann by Juzan (Jubilee King x Liza Jane). De Ann’s maternal granddam was Jubilee King’s sister Sentola. Fudge Royale was out of Illawana Patsy Red by Captain Red by Juban (Jubilee King x Jeanne) and out of Gizea (Go Hawk x Liza Jane). Patsy Red was out of Gildia by Go Hawk and out of Benita, by Knox Morgan. The dam of Larruby King Royale was Illawana Peggy, also by Captain Red. Peggy was out of Illawana Ruby, who was all Old Brunk. The Illawana horses had a reputation of having excellent temperaments and sense and good using conformation. The dam of Prince de Jarnette was June De Jarnette by Glendale by Pongee Morgan (who later went west to Roland Hill to sire some good stock there). Glendale was a double grandson of the mare Galva and his grandsires were the full brothers Allen King and Penrod (the sire of Jubilee King). June de Jarnette’s dam Susette was by Raragraph (Jubilee King x Nella—Liza Jane) and out of Daisy Knox. Prince de Jarnette was solid old Brunk, with the same horses repeating over and over.

The dam of Wanona Princess was Frosty Princess, a gray mare whose color sadly did not pass on here. Her sire was the gray Mountain Silver Sheik whose sire, Mountain Sheik, brings in some unusual old New England blood. Mountain Sheik was by Mendon Boy, foaled 1917 and by Rochester Boy by Pete Morgan. Mendon Boy’s dam goes to Aristos, son of Daniel Lambert. Mountain Sheik’s dam Rachel was by Hinds Ethan Allen and out of Nelly by Aristos.

The dam of Mountain Silver Sheik was the gray mare Toy by Troubadour of Willowmoor. Troubadour of Willowmoor was a grandson of Jubilee de Jarnette, who is the top male line of most of the Brunk pedigrees. Her dam was the same mare Rachel who was dam of Mountain Sheik. Rachel was gray and passed the color to Toy. Mountain Silver Sheik was a rich source of Ethan Allen 50, coming through some different lines.

Mountain Silver Sheik was bred to the Brunk Daisette to get Silver Princess dam of Frosty Princess. The sire of Frosty Princess was King Mick, son of the handsome and correct McAllister by Jubilee King and out of the Charles Reade daughter Mrs. Lewis. King Mick was out of Jeanne by Knox Reade out of Mrs. Lewis. Jeanne was out of Jean Ann by Sentiment, grandson of Charles Reade. King Mick had a concentrated dose of the blood of Charles Reade, source of trotting speed and also rugged good looks and using ability.

So, Mac’s Littlebritches has a rich pedigree of Brunk and WWF with some Old Midwest and a touch of Government and Old Vermont. The same horses appear again and again in his pedigree. This is a pedigree to look at time and again to be able to fully appreciate the richness and complexity. Then, breed this pedigree to that of T Tyme Sunday’s Delight, who also has many of the very same elements, and one has an even more complex pedigree that is so rich in Morgan history. The breed’s two Master breeders—J C Brunk and Elmer Brown form much of the foundation of Sissy’s pedigree. This is a pedigree to build future generations of Morgans upon.