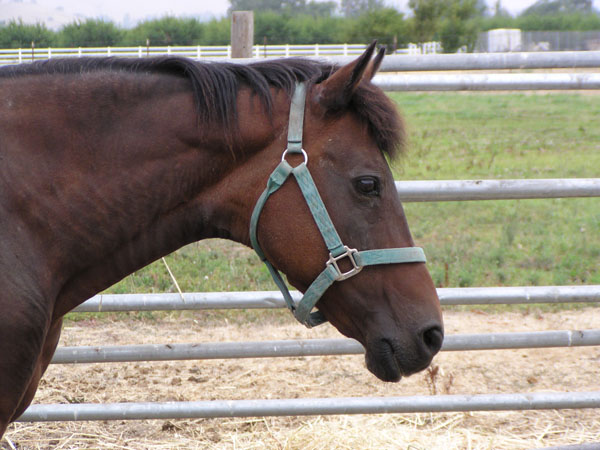 The grand old mare Woodrose Katrina comes from a pedigree of working horses, mostly bred in California. Behind her are such as Dapper Dan, Gay Mac, Antman, Sun Down Morgan, Redman, Mountcrest Sellman, Lippitt Morman, and many good Sellman bred mares who are the foundation of the Western Working Family in California. Breeders of her ancestors are those who helped to form the California branch of the WWF and who knew good working horses and had strict requirements as to what worked on the ranches and what was acceptable in a horse. Katrina was nearly lost to the breed, having few registered produce and those going to people not interested in breeding or their heritage, but wanting really good sound using horses. It is indeed fortunate that she was found and brought back into the Morgan world to leave offspring for breeders of today and for the future.

Woodrose Katrina as a weanling.

Woodrose Katrina
(WindSwept Imperial x Tacinca)
AMHA 088558
1982 Bay Mare
Woodrose Katrina has a pedigree that is a wealth of wonderful Western Working Family mostly old California lines. She is one of those grand old mares, tough but kind and generous with a sweet temper and pretty too. Her sire Windswept Imperial was by the well known Dapper Dan and out of the Sid Spencer bred Little Sweetheart. Sweetheart was by Sid’s good working sire Antman, he by Mountcrest Sellman and out of Pontez (Pongee Morgan, Brunk, x Arab mare). Mountcrest Sellman was bred by Richard Sellman and came to California in utero when his dam came west. He was a sire of note of early California ranch Morgans. The dam of Little Sweetheart was by Sun Down Morgan, found also behind Soleil’s sire, and she was out of Bubbles, double Jubilee King granddaughter.

Going to Tacinca, the dam of Katrina, we find three more crosses to Pongee Morgan (old Brunk) and more Sellman horses. Mountcrest Sellman’s great son Redman is the maternal grandsire of Tacinca. Redman’s dam goes to Pongee Morgan and further Sellman breeding. The Lippitt Morman (Mansfield x Lippitt Kate Moro) daughter, Morman’s Red Lady was bred to Redman to give Tacinca’s dam. Lippitt Morman was a result of Robert Lippitt Knight taking one of his very best mares to the Government farm to breed to Mansfield. Morman was the first stallion to complete the Vermont 100 Mile Competitive Trail Ride, carrying a full western saddle and his rider. He then came to California where he was a popular sire. Red Lady was by Antman and out of another Sellman mare.

Tacinca’s sire Rusty was out of Pongata, by Pongee Morgan and out of yet another Sellman mare. Rusty’s sire Eprus takes us to somewhat different lines as he was by Escort and out of Pomona, both Government bred. Escort was by a double General Gates grandson and out of a General Gates daughter who was out of Marguerite, dam of Red Oaks who is behind so many of the Sellman mares. Pomona was by Troubadour of Willowmoor who was by Troubadour by Jubilee de Jarnette. Jubilee de Jarnette is also found behind the Sellman mares coming thru his son The Admiral. Pomona’s dam is by General Gates and out of a Daniel Lambert mare. Daniel Lambert is behind Jubilee King multiple times and behind Jubilee de Jarnette.
Again, the lines in Katrina’s pedigree are very carefully bred and go to the same horses over and over again. Her pedigree, a history of superior performance and working Morgans.

WoodRose Katrina and her foal OGO Primavera ToughStuff went to those Greener pastures together today.

Toughie had over come each hardship that was put in front of him with good humor and plenty of spunk. To say that ToughStuff had personality was an understatement he was so much like his Dam WoodRose Katrina in that respect.
This morning I heard a noise that just didn’t sound right so as always up I got with the flash light to make the rounds to make sure everyone was doing well. As I came to Katrina and Toughies space I saw that Toughie was cast and with all the signs of an impaction or a twisted intestine.  I got him back on his feet and observed him and could tell that he was in discomfort. I checked his gums and they seemed ok but when I looked at Katrina’s udder I could see she was engorged so I knew Toughie hadn’t been nursing as he normally would.

I gave Toughie some pain meds and called the vet they said to watch him and see if he would pass any manure nurse or drink water until they could get there. Although Toughie did seem to feel better after the pain meds he didnt eat or nurse or drink any water or go to the bathroom and as time went on became painful again. Another call to the vet and they were out in a matter of minutes. After the initial exam it was what I had feared, a severe impaction or worse yet a twisted intestine. The vet said that Toughie might have the best chance if we got him to the hospital and did surgery but at the very least he needed to come to the hospital and be on IVs and be tubed with liquids and oil for any chance at all which in her opinion was really no chance at all. Her professional opinion was that he wouldn’t make it and even if he did this would happen again.

I faced the decision I had been trying to avoid or at least delay and that was what to do for Katrina, without her foal she would grieve for months weaning her foals had always been an agony for her but in her current condition it would have just been torture as this wouldnt be weaning it would death and without a doubt I knew Katrina would not be able to withstand it.

I had been nursing Katrina along day by day knowing full well her time on this earth was short. Katrina loved being a mother so much that before I got her she once stole a calf away from a momma cow. She fought the cow for her calf and after she won she nursed that calf as if it were her own. When the calf was taken away they both had to be roped and dragged away from each other when Katrina was released she promptly broke through fences to get back to her baby calf and by then the Momma cow knew what she was up against so didnt even put up a fight. The mother cow and calf had to be trailered away in the end. For Katrina having a baby was her best joy in life and to take Toughie from her would have been inhumane.

I had Katrina sedated and put down before her foal was so that her last sight and smell would be of her foal and the last things she would hear is me telling her that I loved her, Toughie was already sedated and was put down right afterwards.

WoodRose Katrina holds a very special place in my heart forever as she was the center of my breeding program and produced what I would consider the ideal but more than that her intelligence and personality was in a nutshell delightfully entertaining and amazing. She was not a mare that trusted everyone she took each persons measure and made her decision slowly. She loved and trusted me with no reservation what an honor to have such a thing from such a grand and beautiful mare, I will never forget her and I will always miss her.

Katrina had the following foals in her lifetime.